Medley: Long Tall Texan
Folsom Prison Blues
In Heaven There Is No Beer
When The Saints Go Marchin' In

Medley: Cotton Fields
The Games People Play
Ain't That Peculiar
It's So Nice To Be With You

Posted by By Mark Betcher at 3:50 PM No comments:

Ed Spayer At Work With His Streamliners 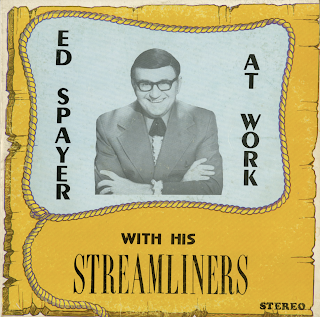 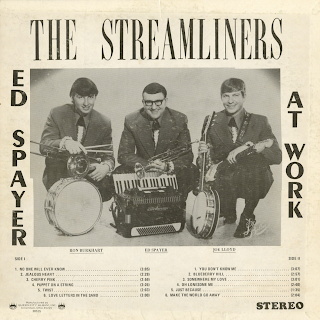 No One Will Ever Know
Jealous Heart
Cherry Pink
Puppet On A String
Twist
Love Letters In The Sand
You Don't Know Me
Blueberry Hill
Somewhere My Love
Oh Lonesome Me
Just Because
Make The World Go Away
Posted by By Mark Betcher at 6:38 AM No comments: 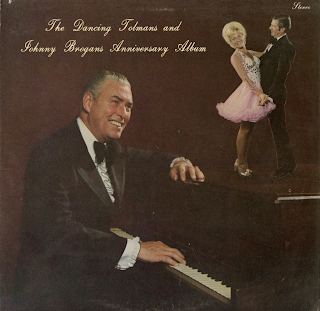 From the back cover: Johnny Brogan – Twenty five years of musical success in the Pops – Dance field is a noteworthy achievement and that is just what Johnny Brogan has accomplished.

The Brogan Band's debut at the Wayside Inn, in 1952, produced a following in the greater Springfield Area the continues today, as then.

The ability to adapt to changing musical patterns of any given era demonstrates a very special talent, as he continues playing todays music with taste and style.

Johnny's Orchestra Members have been with him through the years, playing with equal dedication.

The Dancing Tolmans – Phyllis and Arthur Tolman, now celebrating their Silver Anniversary as Ballroom Dance Instructors, taught their first classes in Palmer and East Longmeadow, Mass. with several ensuing years of large and enthusiastic groups in that area.

Their reputation for excellence in their field brought invitations from communities through-out Western, Mass. New Hampshire and Vermont, often sponsored by P.T.A. Organization and other clubs.

School age students predominated during the early years while todays demands have grown by leaps and bound in the adult sector, with dinner dances an enjoyable outlet for the older set (Adult couples) to show their progress on the dance floor.

The Tolmans are continuously sought after to present their "Dances in Exhibition", with appearances at Art Shows, as Cruise Entertainment and innumerable performances at varied extravaganzas.

Old Black Magic
Opus In Chartreuse
On The Street Where You Live
El Choclo
Love Makes The World Go Round
Cuban Chero
Autumn Leaves/By The Time I Get To Phoenix
San Francisco Hustle
Taste Of Honey
Mambo #5
Whoop-De-Doo
Posted by By Mark Betcher at 6:52 AM No comments: