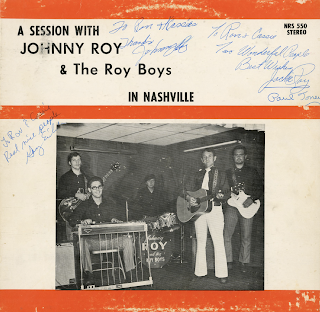 From the back cover: In 1957, a group of musicians was brought to together by Johnny Roy, to form a country music act to work in and around Cincinnati, Ohio. Johnny became the emcee, played rhythm guitar and is the featured singer. Jacky Roy, plays drums, and hails from the home town of Roy, Liberty, Kentucky. From Boon's Camp, Kentucky comes Doug Bowling who manages the group, and plays the steel guitar. Two Cincinnatian's Gary Elchler, who plays electric bass and Paul Toney who plays lead guitar complete the Roy Boys group.

After a couple of years playing local night clubs and VFW halls, the Roy Boys have become so popular that they have in recent months shared the billing with such top country music shows as Merle Haggard, Bonnie Owens, Porter Wagoner, Dolly Partin and the Willis Brothers. In the future are already scheduled shows with some of the most popular music entertainers including George Jones, Del Reeves and Jerry Lee Lewis, plus several shows they will be promoting themselves.

Shoe Shine Man
Okie From Muskogee
Once That Was Me
Mama Tried
Two Dollars In the Juke Box
If They Hadn't Invented The Bottle
Working Man Blues
When Love Dies
Branded Man
Fool In The Corner
Folsom Prison Blues
Today I Started Loving You Again
Posted by By Mark Betcher at 7:20 PM