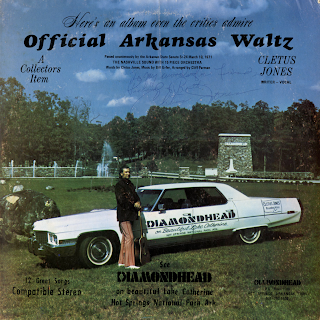 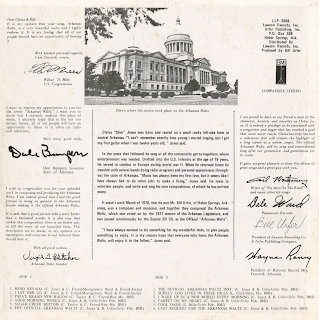 Three versions of The Arkansas Waltz, a tune Cletus was obviously proud of, are featured on this set.


From the back cover: Cletus "Slim" Jones was born and reared on a small rocky hill-side farm in central Arkansas. "I can't remember exactly how young I started singing, but I got my first guitar when I was twelve years old," Jones said.


In the years that followed he sang at all the community get-togethers, where entertainment was needed. Drafted into the U. S. Infantry at the age of 19 years. He served in combat in Europe during World War II. When He returned home he traveled with several bands doing radio programs and personal appearances throughout the state of Arkansas. "Music has always been my first love, but it seems like I have always had to do other jobs to make a living," Jones said. He loves to entertain people, and write and sing his own compositions, of which he has written many. 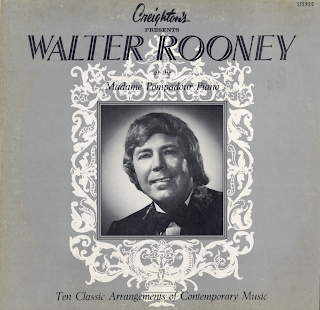 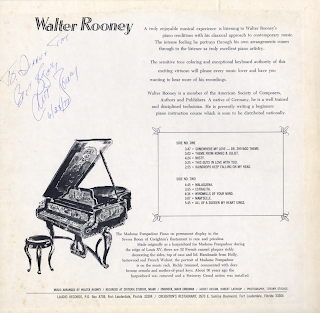 From the back cover: The Madame Pompadour Piano on permanent display in the Sevres Room of Creighton's Restaurant is rare and priceless. Made originally as a harpsichord for Madame Pompadour during the reign of Louis XV, there are 32 French enamel plaques richly decorating the sides, top of case and lid. Handmade from Holly, Satinwood and French Walnut, the portrait of Madame Pompadour is on the music rack. Richly trimmed, ornamented with more bronze ormolu and mother-of-pearl keys. About 30 years ago the harpsichord was removed and a Steinway Grand action was installed.

Somewhere My Love
Theme From Romeo & Juliet
Misty
This Guy's In Love With YOU
Raindrops Keep Falling On My Head
Malaguena
Estralita
Windmills Of Your Minds
Mam'selle
All Of A Sudden My Heart Sings
Posted by By Mark Betcher at 3:17 AM No comments: