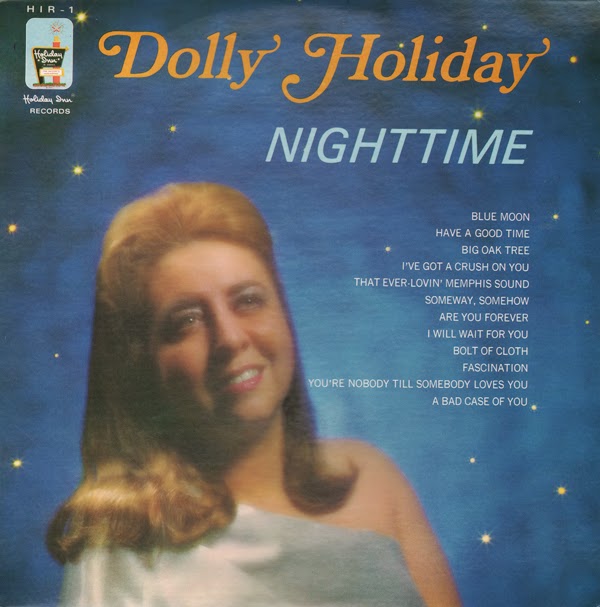 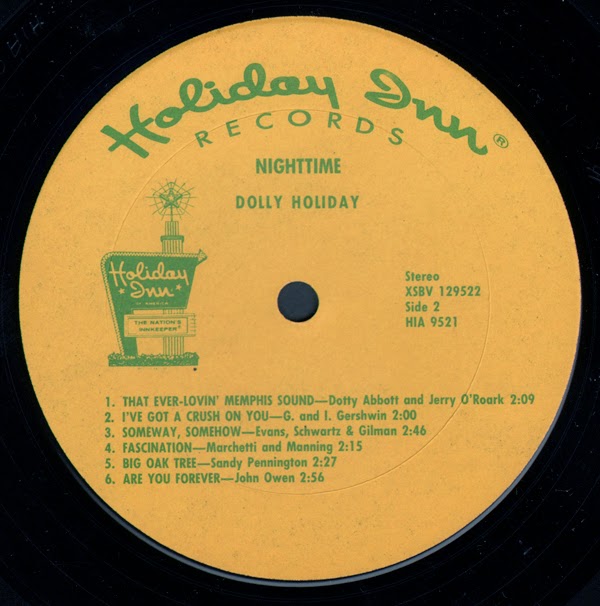 From the back cover: As Dolly Holiday on Holiday Inns Nighttime broadcasts, she is heard more hours by more millions than any person in radio – from midnight to 5 a.m. nightly on 60 stations especially chosen to reach audiences across the land and beyond all our borders. Dolly Holiday talks to more people each week than any woman in history has ever reached.

And now, for the first time, here are the songs of Dolly Holiday, introducing to you the singing voice of the Nighttime lady who has introduced so many other fine singers on so many nights.

Dolly Holiday is, of course, a professional name. Her real name is Dotty Abbott, a veteran broadcasting, an innovator and executive. Dotty is a native of Memphis, home city where the Holiday Inns system was born. She went to Ole Miss and Memphis State, was active from her teens in both board casting and the theater, appearing both in Little Theater and in professional productions, musical and dramatic.

Her speaking voice, her singing voice are the results of years of study and professionalism. In 1951, she became Memphis' first girl disk jockey. Her association with Kemmons Wilson, board chairman of Holiday Inns, goes back to 1955. Wilson and Sam Phillips, who founded Sun Records and was first to record people like Elvis Presley and Johnny Cash, founded the nation's first all-girl radian station. WHER, and they asked her to be its manager. Strangely, in the era when Phillips was launching what became the rock 'n' roll era, they decided this station would provide music of a sort which most stations had stopped playing – the kind of music which had been loved in the '30s and '40s. Dotty later worked for stations in St. Louis, Phoenix, Honolulu and Kansas City, returned to WHER in 1960 and was manager at the same time of WLIZ in Palm Beach, commuting between the two.

When Wilson decided to begin a distinctive radio program for Holiday Inns, he turned naturally to Dotty. Both he and Dotty knew the music and mood they wanted, songs that spoke to the hearer, with melodies. As Dotty says: "He told me he wanted music that will make a man fell like telling his wife or girl friend how much he loves her."

From her own studio built for her in Holiday City, Dotty chooses and programs every record she plays. It was a success from the beginning.

Blue Moon
A Bad Case Of You
You're Nobody Till Somebody Love You
Bolt Of Colt
I Will Wait For You
Have A Good Time
That Ever Lovin' Memphis Sound
I've Got A Crush On You
Someway, Somehow
Fascination
Big Oak Tree
Are You Forever
Posted by By Mark Betcher at 3:25 PM