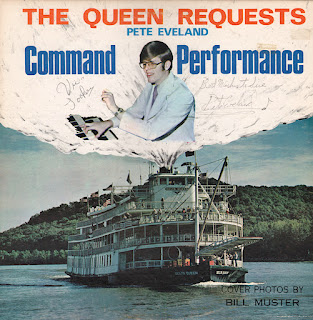 Put Your Hand In The Hand Of The Man From Galilee
The Queen Requests Command Performance
Pete Eveland
Film Associates, Inc. - Dayton, Ohio

From the back cover: A native of Wilmington, Ohio, Pete has been playing the organ professionally since age eleven. He has appeared on numerous radio and television shows. Personal engagements have included Organist for the Cincinnati Bengals at Riverfront Stadium and guest artist for Hallmark Productions of Hollywood, California. He is the youngest member and only organist with the "Louisiana Jazz Club All Stars."