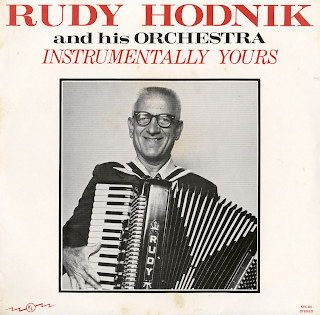 From the back cover: Rudy Hodnik, blind since birth, was always interested in music, and at an early age he learned the melodies of the traditional Slovenian folk songs. He obtained his first accordion at the age of 12, and in 1950 he formed his first orchestra in his home town of Waukegan, Illinois. He entertained for weddings and dances throughout northern and central Illinois and southern Wisconsin. He has starred on live radio broadcasts and has recorded some of his original polkas and waltzes while based in Chicago. He now resides in Milwaukee where he has assembled a new group of talented musicians. The best known of Rudy's compositions is "The Waukegan Polka" which was initially recorded by Frankie Yankovic on Columbia records.