The Unique Sound Of The Vega Bros. 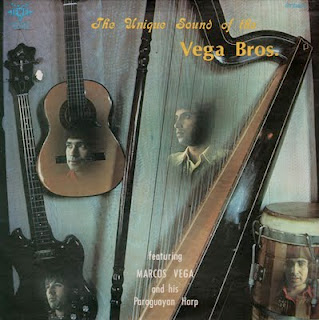 Apparently The Vega Bros. were engaged at The Carrousel Inn, Cincinnati, Ohio when they decided to make this private press recording.

From the back cover: Already well-established in South America, they (The Vega Bros) are enjoying success in the United States in such places as Miami's Hotel Fontainebleau, The Concord Hotel in The Catskills, Chicago's Continental Plaza Hotel and Cincinnati's famous Carrousel Inn.

This album is very different from the typical Jewel pressing. Jewel pressed many white southern gospel albums. This was an "upscale" project for Jewel, including the cover, which may seem a bit cheesy by today's standards, but was an accomplishment back in the day for Jewel who produced many album stock covers. Rusty York owner of the label owner/operator did a fine job engineering the sound.
Posted by By Mark Betcher at 12:48 PM