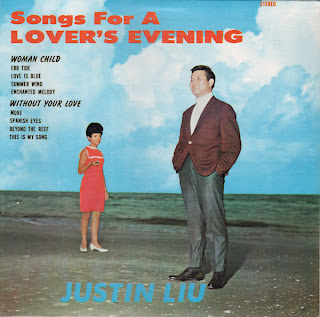 Love Is Blue
More
This Is My Song
Songs For A Lovers
Justin Liu
Oriental Records - Lake Jackson, Texas

From the back cover: Justin Liu, a chemist of Dow Chemical Company in Freeport, Texas, is probably the first Oriental recording artist to record both religious and popular music in English language. Yet his interest in music began after he came to the United States as a student six years ago.

"I intend to try to sing all kinds of music in the future and let the public to decide which type I can do the best." - Justin Liu
Posted by By Mark Betcher at 9:50 PM