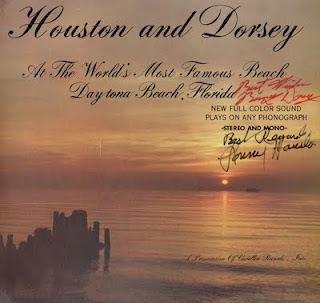 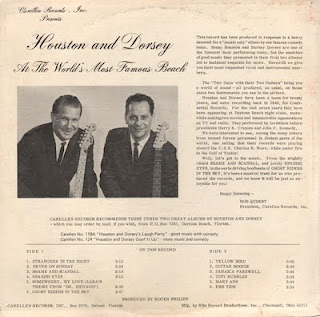 Houston and Dorsey were primarily a comedy act who released a few records, but thought there was enough interest in their work to press a strictly musical LP.

From the back cover: Houston and Dorsey have been a team for twenty years, and were recording back in 1948, for Continental Records. For the last seven years they have been appearing at Dayton Beach night clubs, meanwhile making two movies (Daytona Beach Weekend, 1965) innumerable appearances on TV and radio. They performed by invitation before presidents Harry S. Truman and John F. Kennedy. – We were interested to see, among the many letters from armed forces personnel in distant parts of the world, one telling that their records were playing aboard the U.S.S. Charles R. Ware, while under fire in the Gulf Of Tonkin!

Houston and Dorsey's style relies heavily on a the "watery guitar" sound developed by Vincent Bell.

Ebb Tide, the last track on the B side, puts that watery guitar sound to work to create a killer lounge track.
Posted by By Mark Betcher at 3:47 PM