An Evening With Wanda 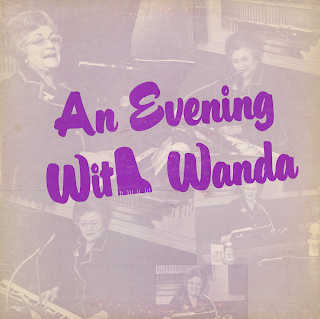 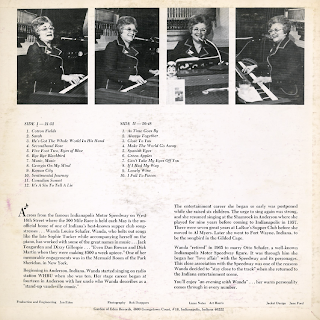 From the back cover: Across from the famous Indianapolis Motor Speedway on West 16th Street where the 500 Mile Race is held each May is the unofficial home of one of Indiana's best-known supper club songstresses... Wanda Louise Schafer. Wanda, who belts out songs like the late Sophie Tucker while accompanying herself on the piano, has worked with some of the great names in music... Jack Teagarden and Dizzy Gillespie... "Even Dan Rowan and Dick Martin when they were making $500 a week apiece. "One of her memorable engagements was in the Mermaid Room of the Park Sheridan, in New York.

Beginning in Anderson, Indiana, Wanda started singing on radio station WHUB when she was ten. Her stage career began at fourteen in Anderson with her uncle Wanda describes as a "stand-up vaudeville comic."

The entertainment career began so early was postponed while she raised six children. The urge to sing again was song, and she resumed singing at the Shamrock in Anderson where she played for nine years before coming to Indianapolis in 1957. There were seven great years at LaRue's Supper Club before she moved to Al Myers. Later she went to Fort Wayne, Indiana to be the songbird in the Gilded Cage.

Wanda "retired" in 1965 to marry Otto Schafer, a well-known Indianapolis Motor Speedway figure. It was through him she began her "love affair" with the Speedway and its personages. This close association with the Speedway was on of the reasons Wanda decided to "stay close to the track" when she returned to the Indiana entertainment scene.

Cotton Fields
Sarah
He's Got The Whole World In His Hands
Secondhand Rose
Five Foot Two, Eyes Of Blue
Bye Bye Blackbird
Music, Music
Georgia On My Mind
Kansas City
Sentimental Journey
Canadian Sunset
It's A Sin To Tell A Lie
As Time Goes By
Always Together
Close To You
Make The World Go Away
Spanish Eyes
Green Apples
Can't Take My Eyes Off You
If I Had My Way
Lonely Wine
I Fall To Pieces
Posted by By Mark Betcher at 5:40 PM