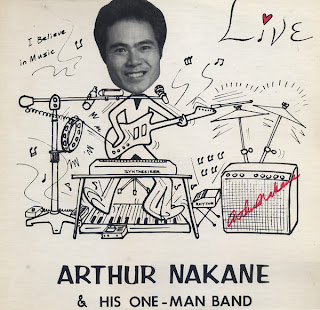 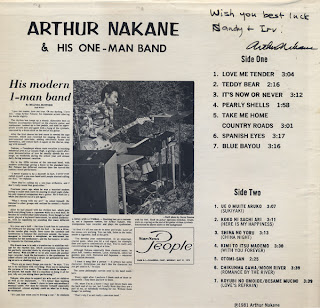 This is an amazing lounge recording. Sometimes, like in the life of Ed Wood, unusual art can go beyond whatever it seems to lack to become a unique personal artistic statement.

There is so much going on here it is hard to know what to write about first. The A side consists of covers of English language songs. The B side consists of what must be Japanese songs, done up in the "one-man band style". Nakane vocalizes parts of some songs in English.

There are also a number of tracks on the album in which Nakane creates a unique tapestry of sound that has a 1960s exotica vibe. At times his vocals seem very much like what you might expect from a new wave band.

According to the newspaper article found on the back cover, Nakane was teaching Industrial Arts at La Canada High and gigged on the side to help support his rather large family that included six children.

He developed his style in an effort to express his musical vision the best way he could. This included manipulating a tape recorder with his feet (along with other devices) while he performed.