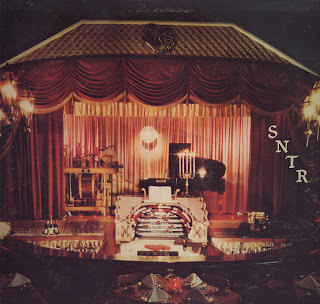 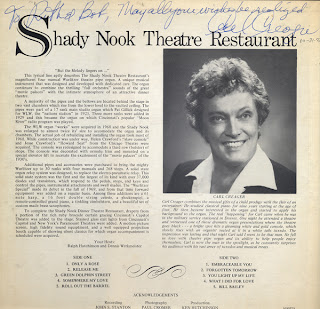 This album is autographed by Carl Creager who played the organ, as pictured on the album jacket, for this recording. The Shady Nook was located on U.S. 27 in Millville, Ohio. See what's left of the abandoned Shady Nook on abandonedbutnotforgotten.com.

The environment pictured on the album cover is a hodgepodge of equipment gathered from around the area. The "works" of the main WLW Studio Organ design in 1925 by Pat Gillick were acquired in 1968 and The Shady Nook was enlarged to almost twice its' size. Helen Crawford's "slave console" and Jesse Crawford's "Howard Seat" from the Chicago Theatre were acquired. The console was mounted on a special elevator lift to recreate the excitement of the "movie palaces" of the 1930s.

To complete the Shady Nook Dinner Theatre Restaurant, drapery from a portion of the rich ruby brocade curtain gracing Cincinnati's Capitol Theatre was added to the stage. Stained glass exit lights from The Capitol and New York's Paramount Theaters were added. A motion picture screen, high fidelity sound equipment, and a well equipped projection booth capable of showing silent classics for which organ accompaniment is scheduled were acquired.

Also from the back cover: Carl is now a man of the spotlight, as he constantly surprises his audience with his vast array of tuxedos and musical treats.
Posted by By Mark Betcher at 5:56 AM