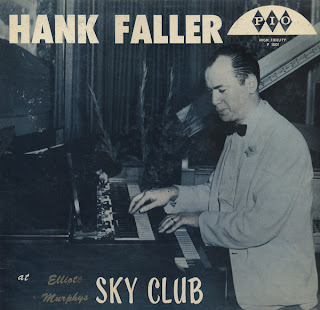 From the back cover: Hank is featured at Elliot Murphy's fabulous Sky Club restaurant located at 600 Old Country Road, Mineola, L.I., adjacent to Roosevelt Field, where dining is a must for the gourmet, and music is a must for the connoisseur.

Elliott Murphy was a wll-known impresario who ran a multi-faceted Aquashow through the 1050s on the site of the 1939 New York World's Fair. He opened the Sky Club in Roosevelt Field, Long Island. The Sky Club was a politically connected restaurant/private club hosting such famous politicians of the time as Bobby Kennedy and Nelson Rockefeller.
Posted by By Mark Betcher at 5:43 AM