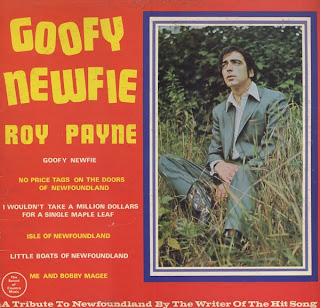 I Wouldn't Take A Million Dollars For A Single Maple Leaf
Goofy Newfie
Roy Payne
A Tribute To Newfoundland By The Writer Of The Hit Song
Paragon ALS 247
Marathon Music, Scarboro, Ontario
1969

On my 127 Yard Sale spree, I met a seller who had a few vintage Canadian LPs that he had kept from his childhood.

Goofy Newfie is slang used when referring to a Newfoundlander.

This album includes an anti-American song (I Wouldn't Take A Million Dollars For A Single Maple Leaf). Payne wrote this song.

From the back cover: In the next year watch for some of the top American country stars to latch on to Roy's tunes.
Posted by By Mark Betcher at 2:34 PM