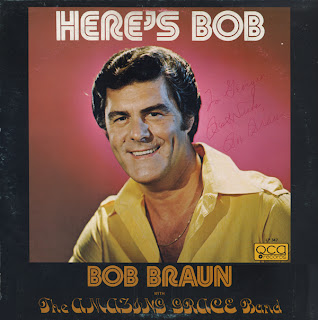 If you aren't familiar with Braun you might consider this album to be just another one-off private press album made by a lost-to-history lounge singer. But you'd be wrong. Braun was born just across The Ohio River, from Cincinnati, in Ludlow, KY. For decades he was probably the best known entertainer in the Cincinnati area. He recorded on Decca and United Artists, charting one top 40 hit, "Till Death Do Us Part". But most of his extensive recording output was on small labels, like Queen City. Braun started singing on local television and on local albums with Ruth Lyons (also a local icon). Ruth turned over her show to Braun due to illness in 1967. The 50/50 Club became the Bob Braun show.

My personal memories consist of watching Braun's show as a kid and being amused by all the "old folk" entertainment. I also happen to be at The Ohio State Fair, probably in 1976 or 77 and saw Braun do his show "live". I had never seen a TV show shot "live" and was struck by how pink he looked. He looked pink, just like bubble gum (from the pancake make-up). Not to cause an uproar amongst fans... but the pink plastic look and show content seemed outrageously weird to me at the time. None-the-less, he was absolutely loved by enough people to keep his show on the air until 1984 when he moved to California to do commercials, talk shows and small movie rolls.