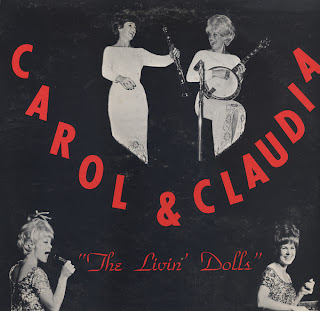 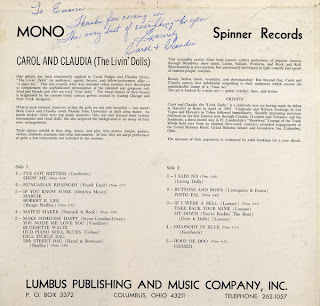 From the back cover: The visual impact of their beauty is heightened by the custom haute gowns created by leading Chicago and New York designers. What is most unusual however, is that the girls are not only beautiful – but smart! Beauty, brains, talent, versatility, and showmanship! But beyond that, Carol and Claudia convey that indefinable something to their audiences which creates the unmistakable stamp of a "class" act.

This album was cut sometime after the act made it's debut at Harrah's in Reno, April 1965. They apparently toured about the country a bit and landed in The Grandview Inn which is located in Columbus, Ohio. This accounts for the Columbus address for the publishing company. The record was probably recorded and pressed during their stay in the area.
Posted by By Mark Betcher at 5:21 AM