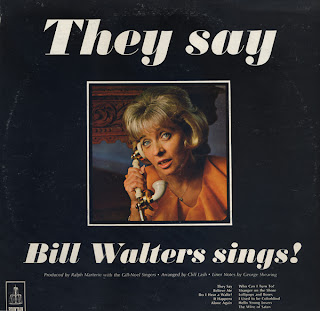 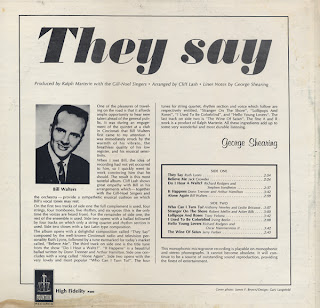 Local private press out of Cincinnait, Ohio. This is the first time that I've found a record on the "Fountain" label. The logo looks like Cincinnati's Fountain Square (the fountain). Fountain Square is a landmark located in the middle of the city.

When I searched Bill Walters online I found him... on my own blog. Check out this post of a Christmas album he made. Walters was a local artist who worked for Ruth Lyons. In that post I pointed out a disconnect between the peppy music and the downer cover art. On this album there is another disconnect. I almost didn't buy this album because it looked like a comedy recording. I understand the idea was to illustrate the song title, "They Say", but was this snap shot of a woman holding an "antique" phone sort of caught looking oddly into the camera the best solution?

Walters has a top notch lounge voice that is smooth and smoky. What makes this album interesting for me is that it is local press and that he met George Shearing while he was playing in town. He impressed Shearing to the point that Shearing recommend he make a record (this one, his first). Shearing also wrote the jacket notes from which I gathered this information.
Posted by By Mark Betcher at 5:48 AM