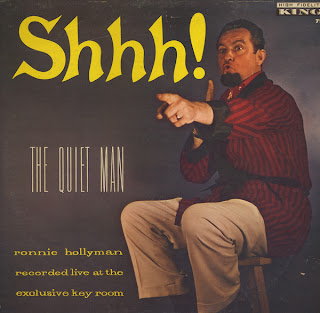 This is an interesting local album recorded live at the Key Room in Cincinnati, Ohio. I can't find any references to The Key Room online.

King Records, of course, was located in Cincinnati. I don't normally find "curious" pressings like this on King. I don't know if King contracted with Hollyman to do this recording or if I can assume that this is a vanity pressing of sorts. There is a blurb in the April 4 issue of Billboard that mentions that Hollyman as part of a story about Cincinnati entertainment. Apparently he did a 10 week "stay" at The Key Room ending on March 26, 1960. The recording was made at the end of the run. I'll include the closing remarks that reference Cincinnati which are heard at the end of the B side, after the song I sampled off the album.

The act and record is curious in that Hollyman is English and much of his "lounge" act is a blend of "English" folk humor, or what seems like English "folky" humor, a few songs that "remember" his service during WWII and even some songs sung in French (I think). The act is just an unusual mix to find on an American lounge recording.

There is a great song about Boy Scouts and A Nudist Wedding, which features some "ornery" lyrics which would go over well in a club setting.
Posted by By Mark Betcher at 5:52 AM