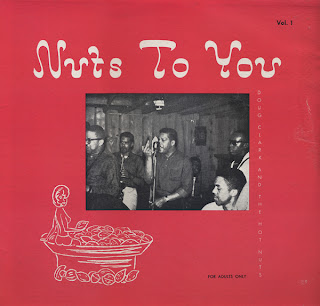 It's hard to see unless you click on the album cover to enlarge it, but the person in the middle of the frame (Doug Clark?) is flipping off the audience.

This was the first of nine albums released by this group. The history behind this group is fascinating.

The Hot Nuts became very popular playing college gigs up and down the east coast. They wowed their audiences with suggestive songs and blue jokes. These gigs took place years before this type of blue act was introduced to the public on wax.

At the height of their fame they produced records on the "Gross" label. This was a label Jubilee Records created just for the band even though they published risque albums at the time. Major labels would not touch the band as their act went beyond acceptable party record fare of the time.

From the back cover: If you are the least bit prudish or puritanical you will not like this album and you might as will not waste your money on it.

Apparently the band once dressed in green jock straps for a gig.

They recorded Ding-A-Ling (on this album) before Chuck Berry made a big hit of the tune.

Their wikipedia page suggests that this group may have been the inspiration for the Otis Day and the Knights group in the movie Animal House.

This is a live album. The group recorded a studio version of Hot Nuts Parts One & Two their best album, On Campus. These songs can be found online by the download.
Posted by By Mark Betcher at 5:32 AM