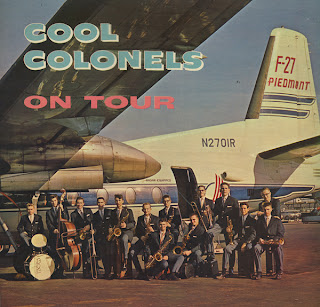 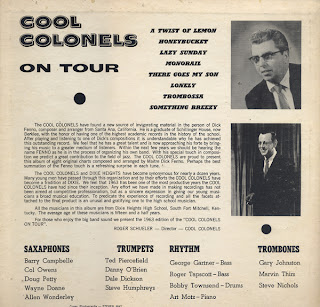 I picked this record up because of the vintage plane featured on the cover image. On quick glance the jacket looks reasonably professional for the period and I was surprised to find no label.

On closer inspection, this group of 15 year olds (average age), turns out to be a high school swing band from The Dixie Heights High School located not too far from me in Fort Mitchell, Kentucky.

I have to say, this is one upscale high school album. 90% or more albums of this nature feature stock pre-printed covers of some nature.

Credit for "original charts" goes to Dick Fenno, composer and arranger from Santa Ana, California. There are no google returns on the name.

The jacket notes suggest that the group had been performing for about 12 years. There is little information to be found online, but another blog entry suggests that this might have been the last year (1963) for the group. And that the group produced four recordings altogether.

There is no suggestion on the jacket as to where the Colonels went on tour (by plane), or if this was just a set up photo, for fun, to illustrate the gigs they may have played around this area.
Posted by By Mark Betcher at 4:54 AM